After completing four weeks of soul crushing work in the surgical ICU, I've decided that I need some me time. And by me time, I mean costuming. Alas, I do have my Anesthesia BASIC boards coming up on July 29th, so I've decided to allocate 1 hour a day to studying and 30 minutes of costuming. While 3.5 hours devoted to my personal hobbies a week may seem excessively indulgent, especially for a resident, I've decided that this would be the best way to stave off insanity.

Anyways, my husband with his tall, stocky figure, and his curly black hair (and blue eyes the color of the sea after a storm), is the perfect cosplay for Jon Snow, so I've decided to go ahead and prep for a Jon Snow costume. I myself will be costuming Margaery Tyrell; who I very much admire for her strong use of shoulder accessories as well as being the only character under the age of 40 who knows how to play the game properly. (The other two being her grandmother played by the still-so-sexy-Diana-Rigg, and Tywain Lannister.)

After rewatching all the Jon Snow scenes from Season 3 (the Nights Watch Jon Snow costume is so much hotter than his Wildling outfit so I've decided to go with that one), and scouring the internet, I've collected a bunch of pictures that I feel do a good job of showing off the costume. 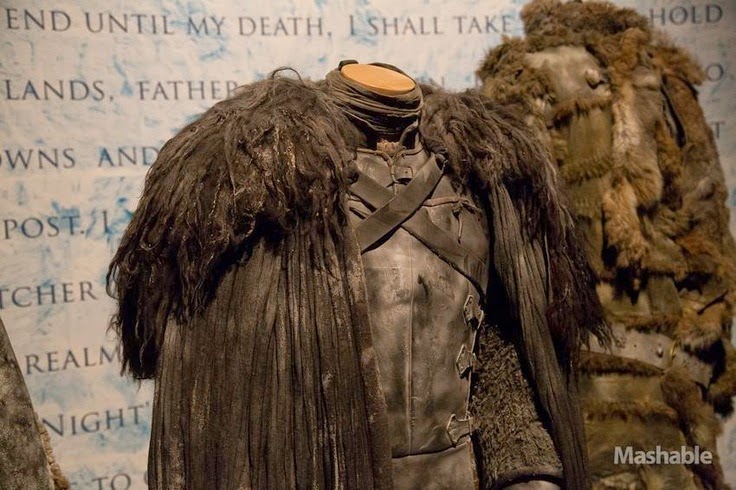 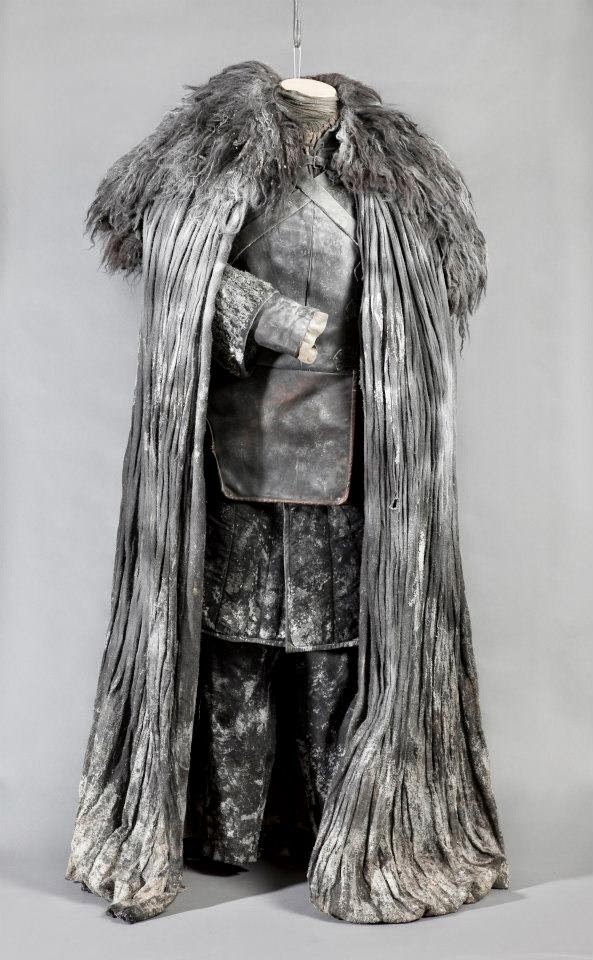 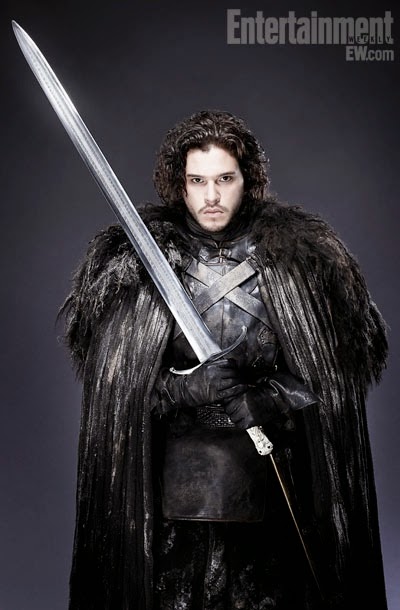 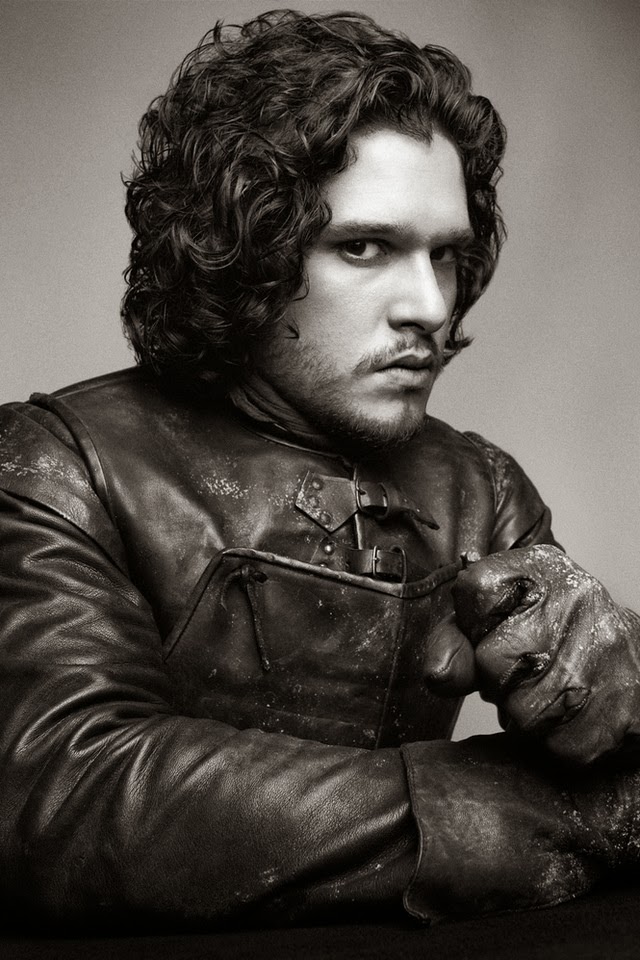 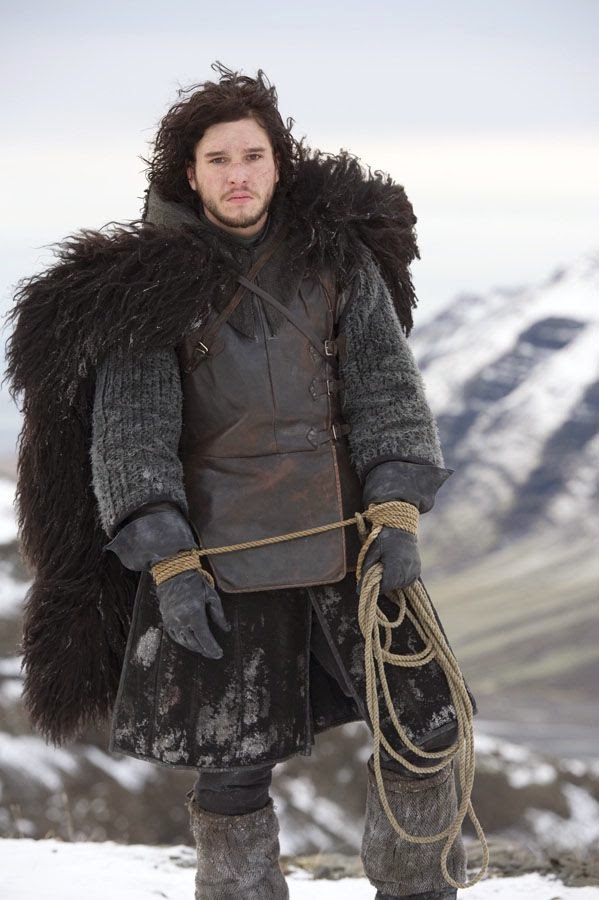 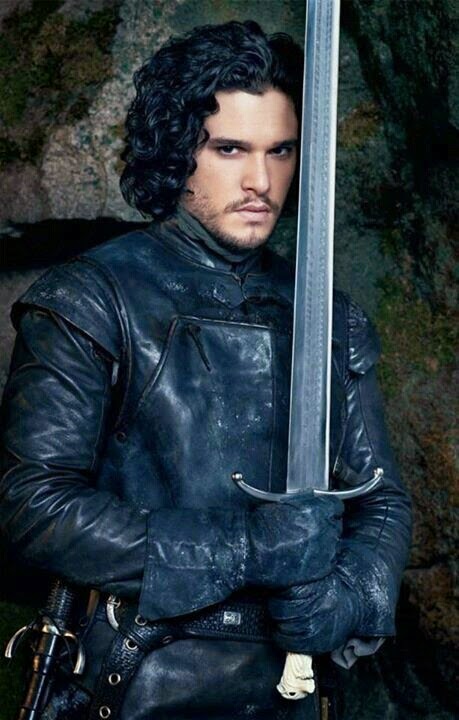 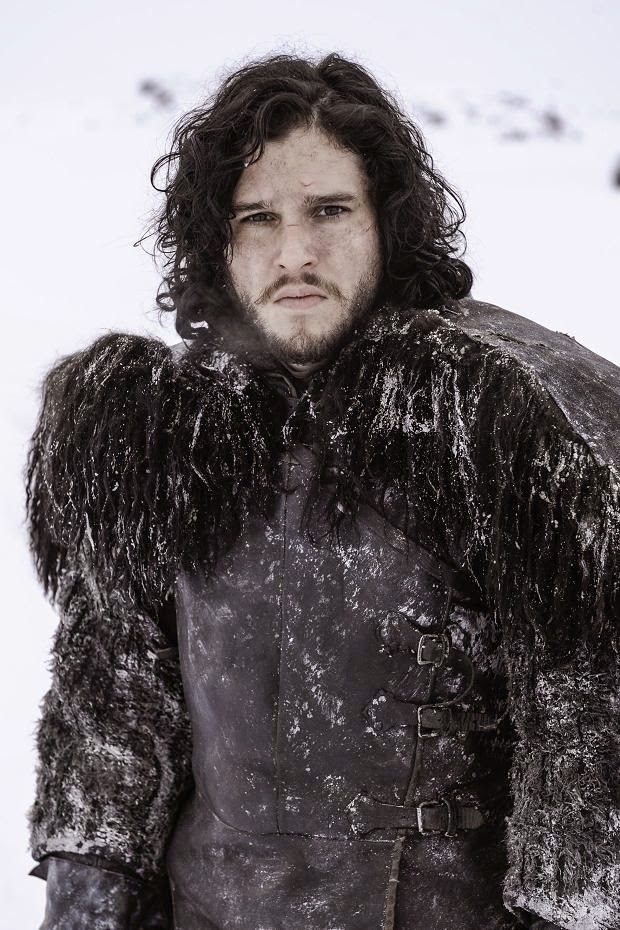 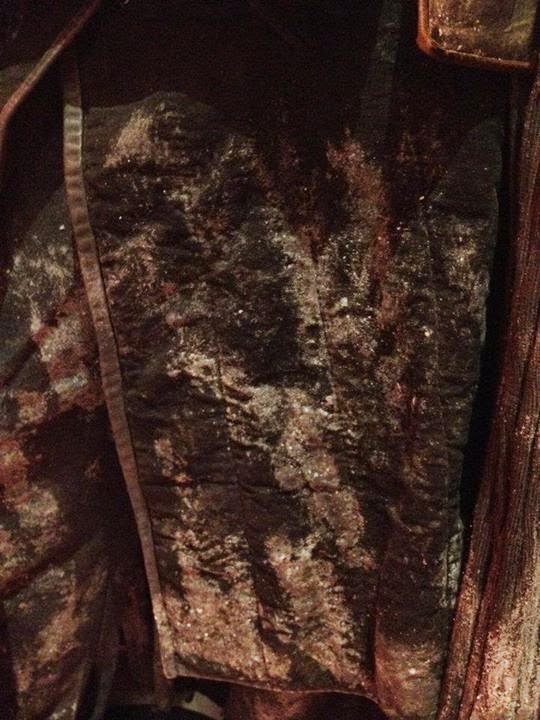 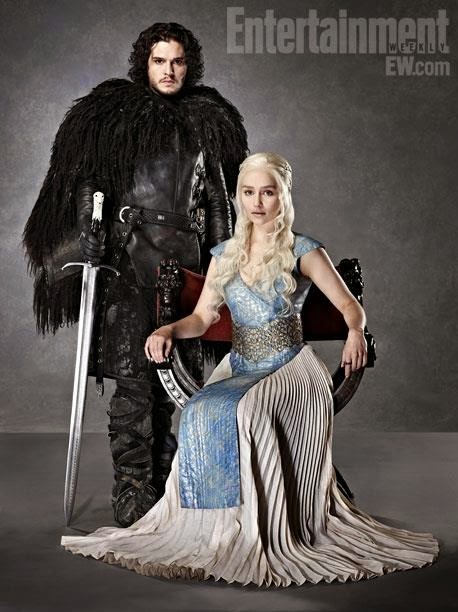 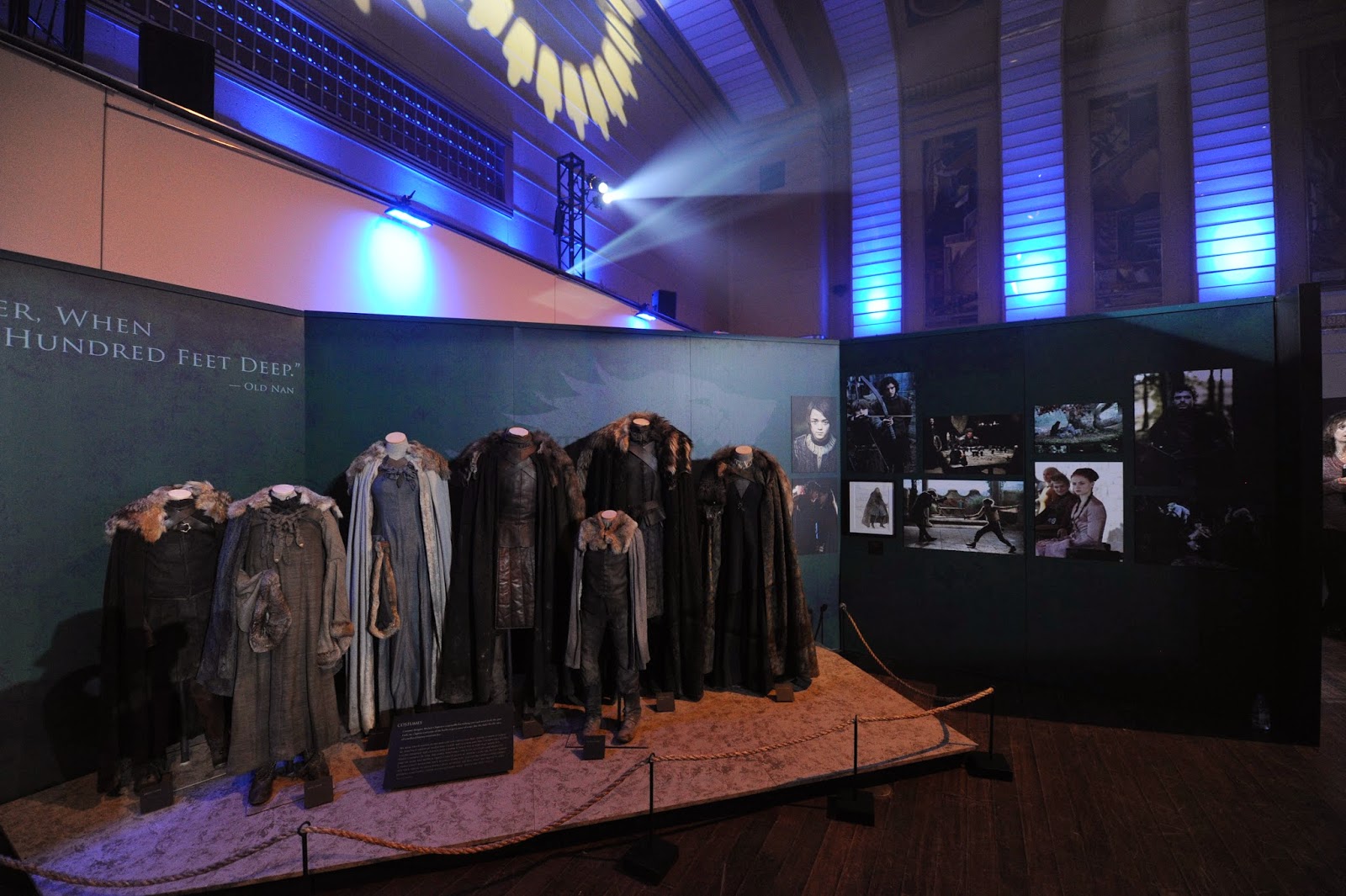 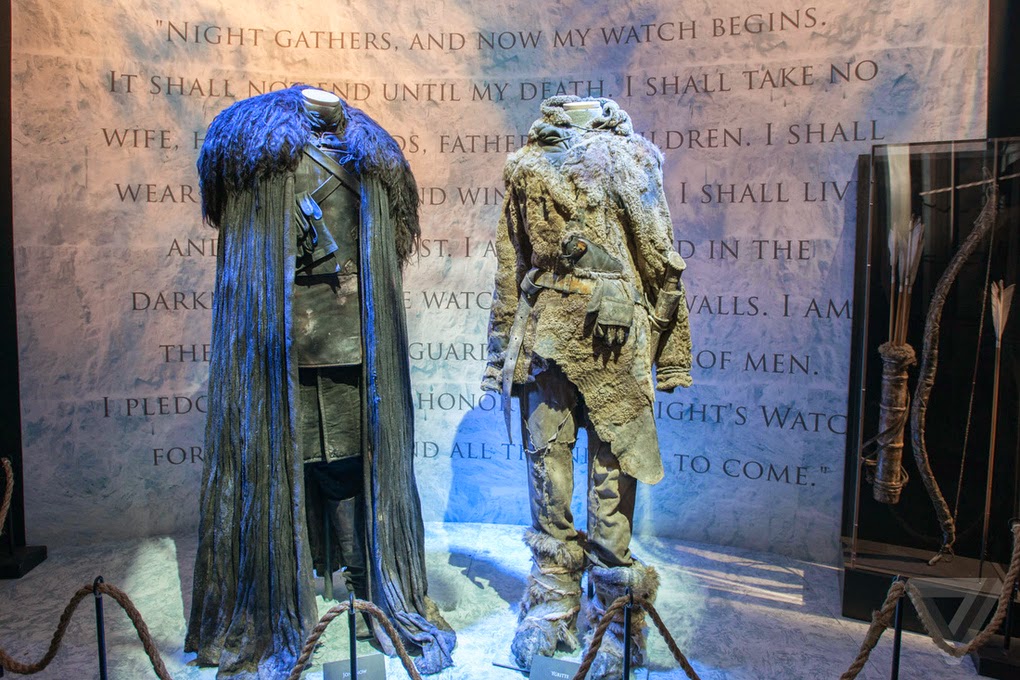 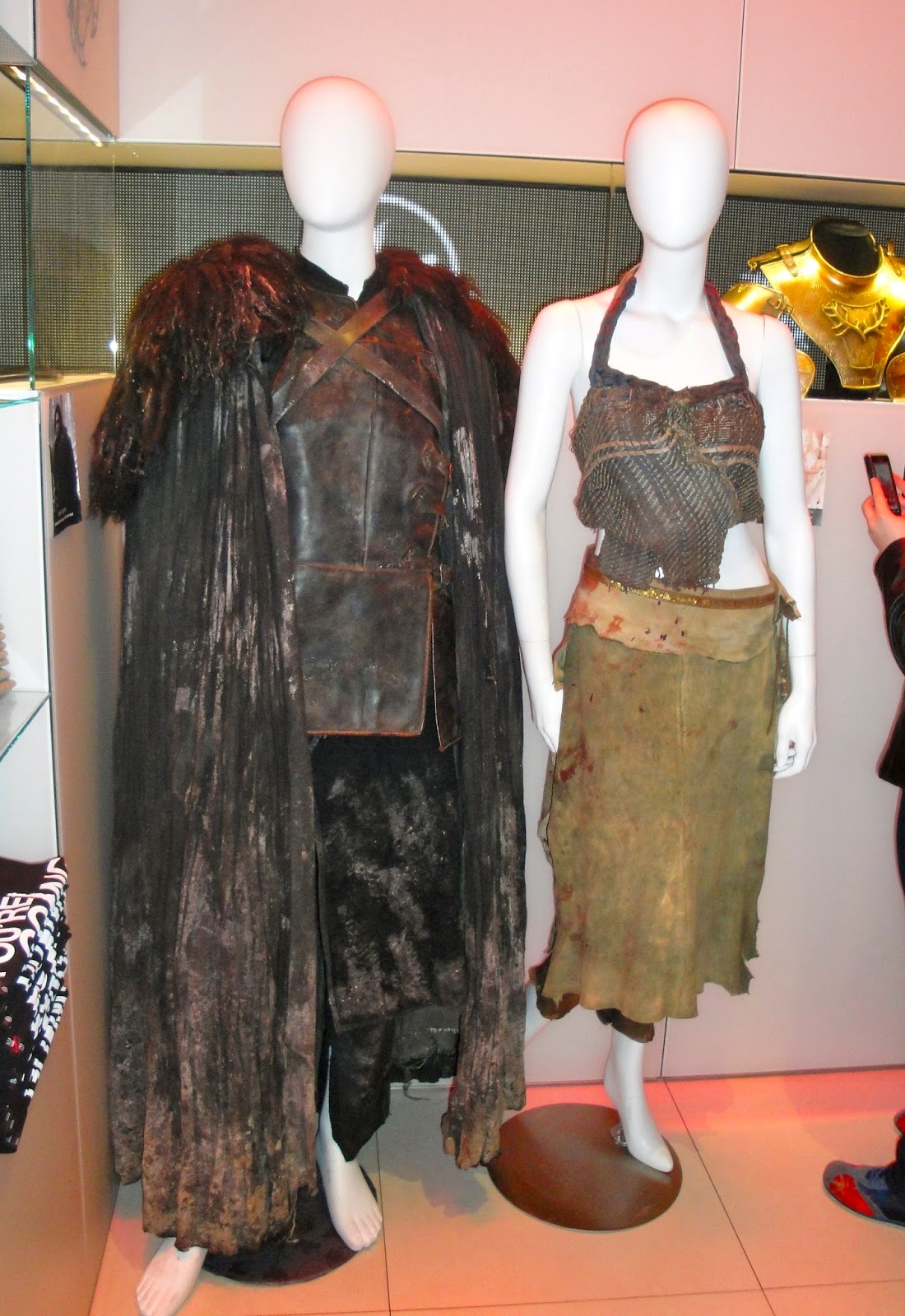 And after studying, I've divided his exterior costume into multiple parts:

1. His iconic cloak; appears to be made of a black pleated linen (you can tell it's linen from the way it frays at the bottom) with a Mongolian wool fur hide. The fur is either dark gray or black; it's likely that they had one of each for different shoots since it looks lighter in some frames. Might be the light though. He has a leather strap that hooks the cloak in place in an X across his chest. I'm not sure where it buckles since we never see it; but I think it's likely that it'll be in the back (as inconvenient as that would be in all practicality) but makes for a very clean and crisp anterior.
2. His jerkin. As you can see from the first episode of Season 3, Jon Snow wears multiple layers. He wears a thin cotton shirt of dark gray, with a leather jerkin that he laces into place (I think he uses hook/eyes in that episode for filming as lacing a jerkin takes considerable more attention). On top of that he has a second chest piece that I believe only goes on front. (You can tell when he grabs it and runs outside.) For ease of use, I will be referring to the first jerkin that laces up as his "under jerkin" and his top piece as his "over jerkin". The over jerkin has two buckles at the neck (and possibly all the way down; we never see), then goes across the chest and buckles on the left with three leather buckless. There appear to be no buckles on the right. You can tell from photos taken from multiple exhibits. By no means am I saying that there are no buckles, but if they are there, they will be much further to the right and do not show up in any museum costume pics, nor any episode. If someone out there knows differently, please correct me. Also, the sleeves appear detachable, which makes sense for the timeline of the jerkin.
3. A kilt. At least I think it's a kilt? Apron? Something that appears to be made of linen/cotton canvas quilted upon to make a kilt like apapratus with a slit in the front for easy walking. I think this would be useful for keeping your heat in, and also for protecting your junk from the wind. Honestly, the Night Watch always reminded me of the Scots so I'm just going to call it a kilt though I doubt it's made of 8 yards and I doubt it's pleated in the back.
4. Pants. Black wool. I think. You never see much of them and when you do they're always covered by snow.
5. Boots. Black. He wears way more detailed ones in Season 3 but Season 4 boots are pretty nondescript.
6. Black gloves. A Jon Snow signature.
7. A sword with a dog head on it. He does not appear to wear his sword at his hilt but on his back. I might just omit this detail altogether.
8. Ghost. To be played by our adorable American Eskimo, Gideon. (We actually have two; the girl, Elspeth will be playing Nymeria)

I think numbers 4-7 will be store bought which leaves me 1-3 to make. The cloak, I will likely make of cotton gauze for its ease of use and it's light weight which will make wearing easier. The fur, I plan on buying a pelt of wool from this distributor on etsy.

The jerkin(s) is(are) a different bag however. I will mostly discuss his overjerkin as we only see his underjerkin in season 1, and S03E01. It appears he has a more 15th century neckline in terms of his jerkin, but then has the rounded waistline of a 16the century jerkin. The mixing of timelines is appropriate since this is pseudo-medieval fantasy, after all.

There is a center seam in both the front and the back as far as I can tell and the seam appears to end at his waist for the over jerkin. The jerkin then hangs below in an apron piece that goes down. The whole thing is edged in leather then aged to look as though it's been brutally beaten by the North.

I went with this pattern-

I then rounded the bottom of the jerkin. It looks like it's made out of very thick leather, likely 3oz-4oz cowhide, but I decided to make the whole thing from 1mm thick cowhide (or 2.5oz/ft weight) as my sewing machine is strong but certainly not designed for leather.

To make the pattern for the over-jerkin, I used these steps (which was remarkably simple).
1. I cut out two copies of the front piece pattern in leftover fabric, but I changed two things about it- I rounded the bottom at the level where the navel would be, and instead of having a curved front opening, I made it a straight line. See photo.
2. I sewed the center seam one for two of the pieces with large stitches and opened the pattern, then drew the shape of his jerkin on it.
3. I cut it out, made my husband wear it, and modified it to best mimic the photo.
4. I cut a two feet by 1foot piece and attached it to the bottom; I curved the edges to best mimic Jon Snow's. It looks like it ends about upper/mid calf on a man. Since Kit Herrington is an average to petite man (5'8"), I think they did this to make him look taller. So it looks like the jerkin ends upper/mid calf and the kilt appears to end right below the knee (just like a Scottish kilt! Believe me, I know).
5. I cut the pieces and voila! Modified pattern. Note that this pattern will not have seam allowances but that's always easy to add later and for what I'm doing, I don't need seam allowances.

I then purchased approximately 20sq feet of 2.5oz black leather from this company.

Coming up next:
Sewing the Jerkin
Posted by Unknown at 8:13 AM